Just listen to it and enjoyed watching. I thought the bass player was one of the best.

They are quite good !

Here's an oldie from Rush's 1975 album "Fly By Night". It was their 2nd studio album, and much of the work captured the fantasy / sci-fi craze that was present during my final High School year. In this clip, Alex Lifeson used all 24-frets of his PRS guitar (plus a pitch shifter) to get some of the ethereal notes in his solo section. And of course they ham it up on stage, enacting the battle scene between the song's combatants with some tongue-in-cheek confrontation. Enjoy!

Good sound. Did you notice the drummer's setup? Most complete setup I have seen in a long time.

Good sound. Did you notice the drummer's setup? Most complete setup I have seen in a long time.

He certainly has a big investment in things to bang on, doesn't he? Other drummers with extensive kits that come to mind are Carl Palmer, Terry Bozzio, and Mike Portnoy ... to name a few. 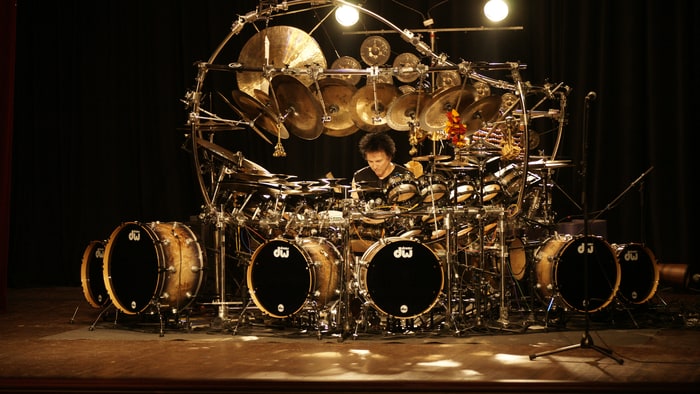 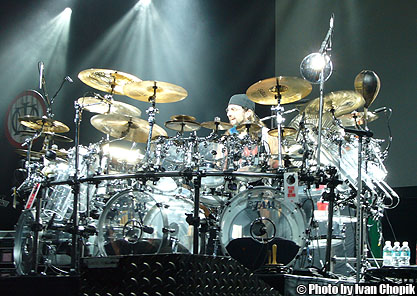 Tenement Funster thank you for postings the other drummers. I just listened to some of each of them and their setups. Each one is great in different ways. Interesting what money can do for drummer's setups. Neil Peart  seems to move less than some of the others. Just to mention it I saw an interview given by Neil Peart when he was not wearing is cap. Now I know why he wears it.

Polish guitarist Mirek Gil is one of my favorites, and he really makes it sing with his solo work in this piece. The group disbanded prematurely IMHO, and Mirek went on to do other projects such as the group "Believe". Collage is now back together, and working on a new album ... hooray! The song is from their 1994 album "Moonshine". 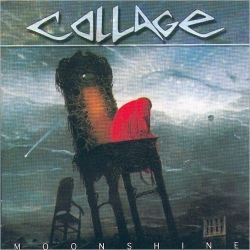 Vocalist Tracy Hitchings is a courageous survivor of two types of cancer, involving a 5-year battle (2006 - 2011) before beating it successfully. Their 2012 album "Entertaining Angels" contains songs mostly about being victorious over life's challenges, and they were back on the road touring again in 2013. This concert was the first of that tour recorded, and her amazing voice and stage presence are as strong as ever. The CD/DVD for this is called "Roadskill": Thanks for sharing it- very inspiring

Just had to post another selection from this great concert ... love guitarist Uwe D'Rose's tones in this one, pinch harmonics, etc.

Got some Celtic flavor this week, featuring the amazing David Bainbridge on guitar, and Troy Donockley on the Uilleann Pipes. The two of them pretty much go toe-to-toe / note-for-note through the whole thing, with Bainbridge having to shake the cramps out of his fretting hand at the end. This is entertaining / virtuoso playing at it's best, and could easily have been in yesterday's "Flying Fingers" post. This is a terrific DVD ... take a deep breath, and hang on! 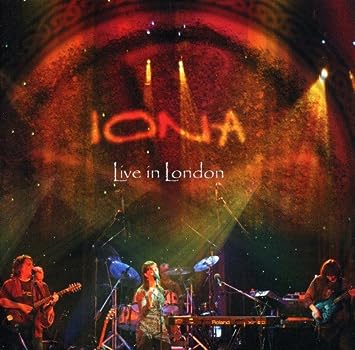 Thanks, that is an interesting group. I listened to some other things they did and the organ player also sings on some of them. Really a unique sound.

Although a very simple melody, I love the solid and tense power chord structure underneath the floating ethereal synth sounds, driven by Iris Camaa's percussion. With some of Bernhard Beibl's wonderful guitar work towards the end, this is one of many examples of why I've been a TD fan since the early 70's. This is from their 2011 album "The Angel from the West Window", which was (if the info I found was correct) the 75th studio album of TD's prolific career. R.I.P. Edgar Froese (1944 - 2015) That's almost as many as The Beatles' releases - when you count the Greatest Hits, compilations of different genres, re-masters, re-masters of remasters,  final re-master "We really mean it this time", The Anthologies, The White Album re-release because someone found a place where Paul pooted in the studio and the other three laughed about it .That one will set you back $100.00 USD because only a finite number were released, and you have to be in a lottery just to stand in line to buy it. And on and on.

That's just a little satire, but pretty close to the truth, isn't it, my friend?

I too love Tangerine Dream, (but never realized they had so many albums) especially like their film work - although I could not now tell you one of them.

About your review: Are you old enough to remember a now-defunct magazine called "Hi-Fi/Stereo Review" (later they dropped the hi-fi)?

A writer named Nat Hentoff wrote reviews on all genres and they were worded very close to the review you just wrote. You're not him, are you?

But he didn't just review the music; he went into detail so deep that when you finished reading you felt as if you had actually been in the studio and could speak intelligently about every factor of the recording, how many grooves on the LP*, etc They also reviewed turntables, speakers (Bang-Olafsun were my favorites, but I could never afford them), 8-tracks, etc..

Man! I sure do miss that magazine!  There is a "Stereo Review" now, but nothing like the original.

Thanks for letting me hijack your thread a little, TF. Now going to listen. I'll leave comments on YT.

No, I'm not Nat Hentoff, but I certainly remember the magazine.

In my university days (mid-70's), a friend and I hosted a radio show called "No Disco" on the campus radio station. We were on Fri-Sat-Sun nights from 10:00 - 2:00, and played a lot of prog rock and what we now call classic rock. It's was our "protest" against all of the horrible disco music which was invading every air-wave back then. Still makes me gag when I hear someone resurrect a disco piece for an ad campaign, whereupon I immediately resolve to NOT buy that product.

Our opening theme for the show was the middle guitar solo portion of "In-a-Gadda-da-Vida" by Iron Butterfly, which we used without permission.

Doing little anthologies on the musicians / bands was a part of our routine, so it's a habit / hobby I've just stayed with. In those days there was no Internet, so we had to make use constant of magazines like Stereo Review, Melody Maker, Circus, Guitar Player, and of course Rolling Stone.

Back to Tangerine Dream, they're still performing without Edgar, although now as just a trio of Thorsten, Hoshiko, and Ulrich ... will never be the same.

Featuring another delicious groove by Gavin Harrison (drums) and Colin Edwin (bass), I keep hoping these guys will get back together someday. After the band's 23-year career, front-man Steven Wilson felt he had to go on to other things, and I have to admit his post-PT work is amazing. This song is from their 2005 album "Deadwing" which was fully recorded in "Surround Sound" technology. Wilson had really begun to stretch his producer's wings during that period, and wrote the music for all the instruments (except drums) with this recording tech in mind. The Surround Sound Expo of that year (Dec 15) awarded "Deadwing" their Album of the Year title, and the US magazine "Sound & Vision" rated it as the #2 album of the year. Even on my stereo system, the sound quality has extra depth, which the group did well to capture live as they toured for it.

TF I love that driving bass and drums on that track.

Here's another great track from Quidam's 2010 DVD "Strong Together". This shows an amazing example of a bass guitarist (Mariusz Ziolkowski) and a drummer (Maciek Wroblewski) really holding a song together, enabling the other musicians to create sound all over the place. Maciek gives a look of exhaustion at the 8:40 mark, and who could blame him? Tons of energy and excellent playing throughout this whole song ... enjoy.

Here's the title track from yes' 1977 album, featuring Steve Howe going nuts on his ol' faithful Fender slide guitar ... which I believe he's had since the late-60s. Hearing Jon Anderson and Chris Squire's harmonies on this one makes me forget that Christ is no longer with us. Very few vocal duos have gone together as well as these two, except for maybe Simon & Garfunkel, or Peter Gabriel & Phil Collins. The album cover reminds me of doing 'shrooms in Geometry class, over 40 years ago:

Still Wednesday ... had to put up this beauty called "Homeworld" by YES, which I was enjoying this evening:

Something a bit on the heavier side this week, featuring some more of Nick Barrett's fantastic Strat tones. If anyone approaches David Gilmour for expressiveness in their guitar style, I'd consider Nick to be one of them. And drummer Scott Higham combines drumming with intense aerobics to keep in shape ... I don't know how he does it. This track is from their very good 2012 DVD "Of of Order Comes Chaos", expertly recorded at the historical Silesian Theatre in Katowice, Poland.

How can anyone turn away from one of Rush's best instrumental pieces, served with freshly-basted rotisserie chicken?

The lads are firing on all cylinders with this one, from their "Snakes & Ladders" DVD touring the album's 2007 release. Someone did a bootleg DVD of their Atlanta concert in 2007 entitled "Tastes Like Chicken" ... I'll bet they got a chuckle out of it:

Although guitarist Kim Mitchell went on to have a successful solo and broadcasting career, the 5 albums that his group "Max Webster" put out in the 70's were amazing. They combined a bit of the Brian Eno / Talking Heads psycho drama with a prog rock attitude, and came up with gems like this one. Most of their lyrics were written by psychologist Dr. Pye Dubois, who also wrote the lyrics for Rush's "Tom Sawyer". And Rush's Geddy Lee recorded with MW on their song "Battlescar" on their final album "Universal Juveniles" in 1980. I had the great pleasure seeing both Max Webster and Rush in concert together in 1977. This song is from their 1977 album "Mutiny Up My Sleeve".