Thanks for the heads up, CG ... that's really odd 'cuz it's usually the reverse. Try this one; it's the same rendition, but posted by someone else:

I think this might be the same thing: https://www.youtube.com/watch?v=nENrB7hvplY

I think this might be the same thing: https://www.youtube.com/watch?v=nENrB7hvplY

Same concert, CG, but a different tune from it ... good find. There's an interview with Deep Purple's former guitarist (Ritchie Blackmore) in this month's issue of "Guitar" magazine. In it, he says he never gets tired of playing "Smoke of the Water".

I couldn't decide on one selection for this week, so here are two from Roxy Music's terrific concert at the Apollo Theatre in London, from 2001. Roxy Music always had a bit of an avante garde edge to their style, and no one (except for perhaps Todd Rundgren or Split Enz) really came close to producing music anywhere similar. Vocalist Bryan Ferry's unique style has made them easily recognizable. This performance features a stellar violin solo by Lucy Wilkins, reminiscent of Eddie Jobson. And Phil Manzanera's iconic red 1964 Gibson Firebird is high up on my wish-I-owned-one list. There's a wonderful article about Phil in the June 2018 issue of "Guitar World" ... a true gentleman.

The dramatic one-by-one exit of the band members at the end of "For Your Pleasure" (while the song plays on) is both haunting and beautiful ... enjoy!

This one was enjoyable, and with at times a strange combination of instruments that sounded great.

Although this a new version of the group UK, and the song is from King Crimson's third album ("Red"), singer / bassist John Wetton co-wrote it with Robert Fripp, so I guess it's not really a cover. Drummer Marco Minneman is probably one of only a handful who could take over with Bill Bruford's abilities on the skins. I've been personally enjoying how a lot of prog groups over the years have used the violin in their work, and Eddie Jobson has to be considered on of the pioneers for doing this. Plugged into an effects array, he gets lots of interesting sounds from his signature acrylic-body instrument. Wetton is in fine voice here, and he's been missed since his passing in January 2017. 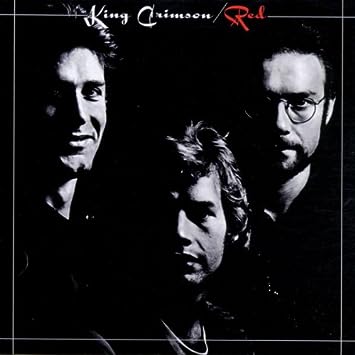 From the 1976 album "A Trick of the Tail", this was Genesis' 7th studio album and their first without Peter Gabriel. The album is a collection of songs with an "Alice in Wonderland" type of feel. Critics were wondering how the group would fare without Gabriel, and this album showed high-quality sound and song-writing as a capable answer to their concerns. "Entangled" is a fun song to learn on the 12-string, and it's always better if there's another guitarist with a 12-string to work along with. Although the basic riff is reasonably simple, there's lots of room to tweak and improvise, especially in the closing couple of minutes. It's about a person's experience in surgery, and the dream-scape effects of going under and coming out of anesthetic.

Tenement Funster Genesis is is a great choice and I still  have some CD's with Peter Gabriel. They were on 33's and I converted them and some others to CD's so listen when I drive.

Someone in the comments used the word "Hauntingly", TF. I'll add the word "beautiful". You can choose Genesis for me anytime, my friend. Loved Bill Bruford's percusssion work in ALL Genesis music, by the way. Percussionists are simply great drummers. Me-I'm just a simple drummer..

CG ... glad you enjoyed it! I have used an online file converter to save a lot of YouTube music as MP3's, so I could do the same thing. I had a large vinyl collection at one time, but it was all lost in a fire over 30 years ago.

Bill ... I've always loved Genesis, but for me the musical creativity went downhill somewhat when Steve Hackett left, not Gabriel. Of course that's just a matter of personal taste. Phil, Mike, and Tony decided to go into the pop music genre to make more $$$, because ... let's face it ... prog rock is not usually a huge money maker.

Your sharp eye spotted Bruford playing along with Collins for that tour, which put two of the best drummers of that era on the same stage together. Apparently Bruford would have stayed with Genesis full time, if they'd wanted him for studio and stage work. But of course Phil did the studio work, so it wasn't a good enough deal for Bruford. Not long after, Chester Thompson came along, and spent the next decade or so touring with them.

This is the first track from Karnataka's 6th studio album "Secrets of Angels", released in March 2015. Like many groups, personnel changes have abounded since their forming in 1997. The lineup here was together from 2011 - 2017, featuring guitarist Enrico Pinna, vocalist Hayley Griffiths, and founding member bassist Ian Jones. Unfortunately, they announced they were breaking up late last year, with some of the band members not being aware until the notice was made public. On the positive side, the work they did produce is very high quality, and Griffiths brings her vocal and dance experience from Michael Flatley's "Feet of Flames" performances to add solid stage presence to the group.

BTW is the first track from Heep's 20th studio album "Sonic Origami", released in 1998. The song was written in memory of two late band members David Byron (1947 - 1985) and Gary Thain (1948 - 1975). The simple but memorable cover art demonstrates the maturity of the the group at this stage of their career, and the whole album is full of solidly written rock and prog rock songs. This clip also features the late Trevor Bolder on bass (1950 - 2013) who passed due to complications from cancer surgery. There's something most admirable about a group that has seen the inner tragedy these guys have seen, and yet still manage to keep going and keep creating great music. With a career now spanning almost 50 years (formed in 1969) Uriah Heep has definitely made their mark in history. Listening to this song, I realized I had never even given this "band" (quotes used because they are much more than that). So much musicianship from these people - one can tell they didn't just it down an worked out the parts. I think there was a "spirit rock conductor" in the rehearsal room with them. Of course, I am only joking. Uriah Heep needed no such thing. I thoroughly enjoyed what I heard and watched. Thanks, TF.

ahh yes .... Uriah Heep
Listen to them many a night in college.
My favorite songs were "Sweet Lorraine" and "Easy Livin' "

I suppose if we needed to pick a genre for this song, it would be "Irish Gospel Prog" (does that even exist?). Personal opinions of the subject matter aside, this is a beautifully majestic and atmospheric piece, with lots of talent and a tight performance throughout. The tones that guitarist David Bainbridge gets from his Fernandes "Dragonfly" guitar are amazing, making great use of the built in Sustainer pickup. "Encircling" is from their 1995 album "Journey Into the Morn". It is always interesting when some of the band plays more than one instrument or a guitarist playing an organ too. Nice sound and talent.

So the language being sung is Tribal Irish (is there such a thing). I guess what I'm trying to say is, I couldn't understand that beautiful voice and the lyrics were in -- what -- Spanish? And live in London?

Mystifying. Maybe I'm missing it, but being a drummer primarily, I could have used a key sig. Based on what I just wrote, CG and TF, can you discern that I need to hear more from this group before saying I like them?

Bill if you listen really closely she is singing in English just dragging some words out longer.

Aha! Thank you, Sir. I thought I was listening to some kind of dialect. Just wasn't sure which one. I will search for more from "Iona", because a voice that beautiful needs more attention than just one listen. I shall return after I do that and then let you both know which song I have listened to.

Aha! Thank you, Sir. I thought I was listening to some kind of dialect. Just wasn't sure which one. I will search for more from "Iona", because a voice that beautiful needs more attention than just one listen. I shall return after I do that and then let you both know which song I have listened to.

Hi Bill ... here are two others of theirs which are personal favorites ... Bainbridge is an amazing guitarist:

This is the one I have chosen for my additional listen: https://www.youtube.com/watch?v=nj5juZctCGE...... As a matter of fact this is my third listen and Dondra's first. I read some of the comments, Rick, and I agree: very spiritual and calming. Looks like you chose that one for me to hear as well!

. I am now on my way to listen to hear the second choice you listed. I am glad I listened more than once. Thanks for this awesome choice for your "Prog Rock" page and thanks also for the explanation of what I was hearing, CG!

This is a track from Marillion's 1985 album "Misplaced Childhood", when Derek "Fish" Dick was their lead singer. His replacement (Steve Hogarth) does an admirable job (IMHO) of capturing Fish's emotion and intensity; it's a big challenge to take someone else's song and really take charge of it. I'm also continually amazed at the gorgeous tones guitarist Steve Rothery gets from his $250 Squier "Vintage Modified" Strat. His solo at 3:50 is very powerful. I read somewhere that he got tired of having expensive gear stolen while on the road, so this was his answer.

As a founding member of Genesis, Peter went on to a very successful solo career as we all know. Although he eventually found his way to a more "pop music" type of writing, he maintained a lot more originality than most do in this genre. This "Secret World Tour" concert was recorded late in 1993, and came out on DVD in 1994. Having worked with several female co-vocalists over the years, I have to say that Paula Cole is my favorite. Her voice blends so well with Peter's, and this rendition of "Come Talk to Me" is one of the best. And of course, there's always a bit of Gabriel's trademark theatricality ... a powerful weapon, in Batman's opinion. 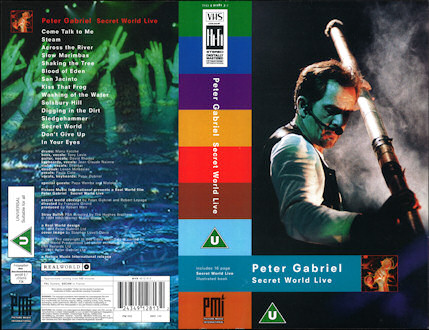 That was impressive. And you are right on with  Paula Cole's voice blending so nicely with his voice. I don't actually think this sounded like  Prog  music at least to my ears.