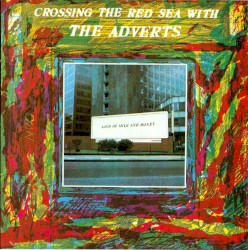 Crossing the Red Sea With The Adverts (1978)

The Adverts were an English punk band who formed in 1976 and broke up in late 1979. They were one of the first punk bands to enjoy chart success in the UK; their 1977 single "Gary Gilmore’s Eyes" reached No. 18 in the UK Singles Chart. The Virgin Encyclopedia of 70s Music described bassist Gaye Advert as the "first female punk star".