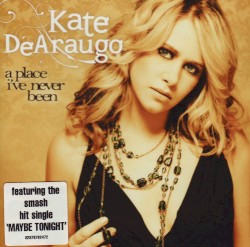 Katherine Jenna DeAraugo (born 5 November 1985), is an Australian singer-songwriter who was the third winner of Australian Idol in 2005. After idol, DeAraugo signed to Sony BMG and released her debut single, "Maybe Tonight", in November 2005. The single debuted and peaked at Number 1 on the ARIA Charts and was certified platinum. Her debut album, A Place I’ve Never Been, was released in December 2005 and was also certified platinum. DeAraugo later became a member of the multi-platinum selling girl group, Young Divas, which disbanded in 2008.