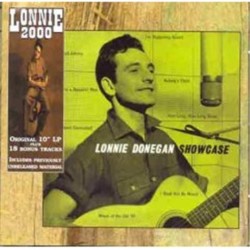 Anthony James Donegan (29 April 1931 – 3 November 2002), known as Lonnie Donegan, was a British skiffle singer, songwriter and musician, referred to as the "King of Skiffle", who influenced 1960s British pop and rock musicians. Born in Scotland and raised in England, he was Britain’s most successful and influential recording artist before the Beatles.Donegan had 31 UK top 30 hit singles, 24 being successive and three at number one. He was the first British male singer with two US top 10 hits. Donegan received an Ivor Novello lifetime achievement award in 1995 and, in 2000, he was made an MBE.