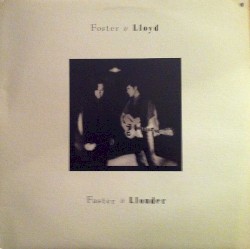 Foster & Lloyd is an American country music duo consisting of singer-songwriters Radney Foster and Bill Lloyd. After pairing up in 1986, the duo recorded three albums for RCA Nashville, charting nine singles on the Billboard country charts. The highest-peaking of these was their debut single "Crazy Over You", a No. 4 hit in 1987. After disbanding in 1990, Foster and Lloyd began solo careers. They reunited in 2010 to release a fourth studio album.