Really nice and clean playing by Van Larkins. You find some interesting people Tenement Funster. I also noticed he used a thumb pick and that is not that is not unusual on steel stings.

Glad you enjoyed him, CG, and I appreciate your kind words. Music truly is a language that spans the globe and time itself ... great musicians are all over the world, and there seems to be just as many variations of how it's performed.

TF I love the way Van Larkins playing and the stunning natural backdrop make for a visual and very enjoyable musical experience.

From our Canadian province of Quebec, Antoine is named by many fingerstylists as their inspiration, and a "guitarist's guitarist".

While this isn't a guitar, it definitely qualifies as "Flying Fingers" ... awesome performance.

I have never seen a harp sound so beautiful before. Almost sounded like picking a piano. A very nice find TF.

I have never seen a harp sound so beautiful before. Almost sounded like picking a piano. A very nice find TF.

That's a good description ... plucking a piano. Anyone has to appreciate the sheer ambition to attempt a transcription of Bach's famous pipe organ work, and Ms. Turk has done it admirably.

And here's a piece written for piano, transcribed for bass guitar ... I simply must learn to play this!

good luck in playing it !
Way too hard for me.

Nice to see an original piece from Alexandr, although his covers are very creative and well-executed.

Incomparable smoothness, technical excellence, and passionate voicing .... Joe's got it all.

You know, more often than not, when I come to your "showcase" threads, the talents of those you choose to portray lead me to look for more music by those artists. So it is with Mr. Joe Pass. I'm listening to the tune you linked us to as I write, and here's another fine example of how good you are at picking them!  "Ain't Misbehavin'" has always been a favorite of mine. Not just a favorite Fats Waller tune, but one of my favorite songs of all time.

Looking forward to your next choice, my friend! It's like opening a wrapped present wondering what's inside, because "One never knows, do one?"

Thanks, Bill ... very kind words, and I'm glad these showcases are being viewed and enjoyed every week. There aren't always comments, but the number of views grows constantly, and that's gratifying in itself. There is SO much good music in the world, from so many genres. I enjoy listening to it and sharing it with others ... even more than I enjoy playing it.

Fact is, most of what I love is beyond my abilities, but there's always something to be learned from watching the great ones.

For my friend Tenement Funster and other guitarists who like Joe Pass.

"Sure! I have 25 minutes to spare in order to play what must have taken Joe a lifetime to learn!"

I'm joking,  of course, but I saw this featured over to the side of TF's video of Joe playing "Ain't Misbehavin' " There's also a part 2 to this instructional video.

Another fantastic piece of composition / playing from Ewan ... the agility, reach, and strength in his little finger is amazing.

OMG. I listened, and as I tried to place who he sounds like, I couldn't come up with anyone. Leo Kottke, maybe? No. Leo doesn't play that way. There was simply no one I could come up with to compare him to.

I didn't notice the Canadian flag until someone in the comments remarked upon it, but ALL those fingers look like they belong to an alien!

Also, being a drummer, I was very interested in what looked like the low E providing the rhythmic feel of a snare drum. And while we're on the subject of drums, let me say I wouldn't want to face this guy in a drum battle. I think he has a brain in each one of those fingers.

I was totally mesmerized all the way through and am now going to download some more of his YT performances.

You Canadians really do produce some fine musicians, TF. Thanks for showcasing this one.

his pinky does seem to be double jointed, you never know Bill, his fingers may be computer generated?

Thanks for the comments guys, and your compliment, Bill, to the great white north. Despite the vast geography, we have a national population that's at least 2,000,000 less than the state of California. And a full 25% of our population is in 6 cities (Vancouver, Edmonton, Calgary, Toronto, Ottawa, Montreal). Lotsa elbow room everywhere else.

One advantage of having 4-6 months of winter, is that there's nothing better to do than stay in and play music or watch hockey. Great musicians come from all over the world. What differs from place to place is publicity. I wonder how many amazing guitarists from obscure places there are, that we'll never hear about?

Tommy's improvised version of this classic has all of the original elements, with several hundred more notes added. Along with his considerable talent is his ever-infectious joy when he plays.

Tommy is fantastic!  He will be doing a concert near our area soon,  I have house guests who are coming from Pennsylvania to attend the concert.

Live in the "now" - a contentment of the moment - the past is gone - the future doesn't exist - all we ever really have is now and it's always "now".

I think I could pick out that giggle of his anywhere, TF. That man just loves to play guitar!

What's that thing below the 11th fret? If I've ever seen it elsewhere, it must not have grabbed my attention enough to comment upon it.

Also, did you catch that little bit of "Play guitar like Tommy" spam under the video and before the comments? To that I would have to say "Yeah, right."

Thanks for another great feature, my friend!

Bill- I had the same question about the fret thing !

guitar player - "I might as well stop playing guitar"

Thanks for sharing
Jim

Yeah, Tommy's a blast to watch, isn't he?

I'm not sure what you're seeing below the 11th fret. The 12th fret marker is quite large, then there's a piece of white striping from a fold in his shirt that peeks in and out, and finally there's some shine from the heel of the neck that reflects at times. Are any of these things what you're seeing? Here's another view of his Maton guitar which may help: 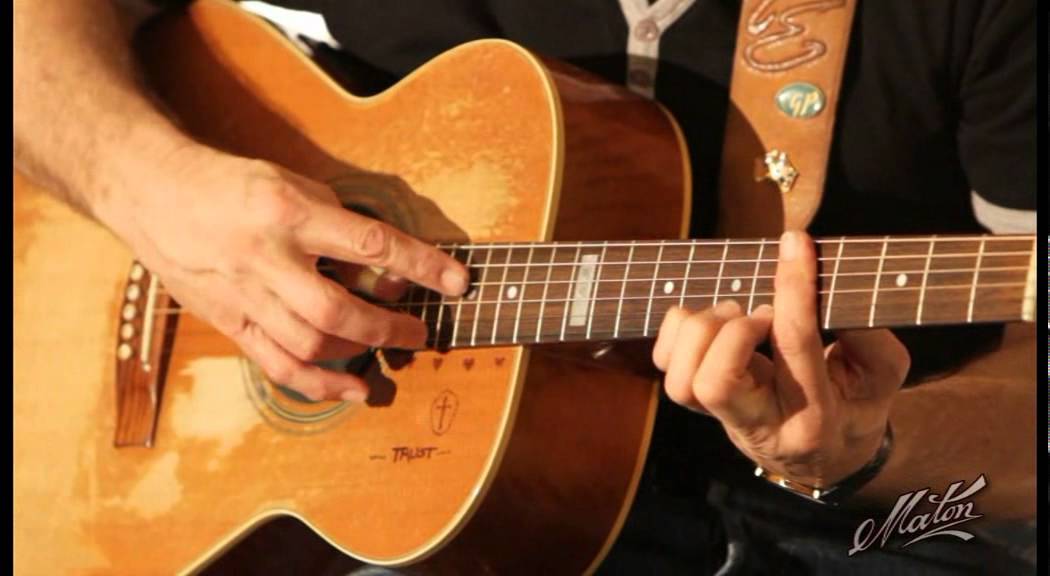 I am thinking if it had anything to do with helping you play like that - I need to put a bunch of them on my guitars !

In the photo TF posted, methinks I see (below the 11th fret kinda on the heel of the neck) the reflection of light glinting off of a strap button...?? Could that be what Bill was seeing I wonder?