I visited the Smithsonian Air & Space Udvar Hazy center over Christmas.  If you're not familiar with it, the Udvar-Hazy was the Smithsonian's repair and salvage center at Dulles Airport in Dulles, Virginia.  The B-29 in the background is the Enola Gay!

This same museum has the Discovery space shuttle and the last operating SR-71.  The plaque said that it took the pilot less than an hour to fly the SR-71 from California to Virginia - 3,000 miles!

That blackbird was one moving sob i love old ww2 aircraft especially the ME262 German jet,P38,P51mustangs all the revolutionary designs of the early German jets damm good thing we knocked out there manufacturing plants or we would all be speaking German

Lots of great history there, I'm sure.  Never been, but would like to see it

Like too go see these planes,I would really like too see the P51 mustang and english Spitfire. also any of the bomers.

I've been there many times but its been at least 3 years Since my last visit.  Your post has got me thinking a mid-winter trip may be in order.

I could hang out a one of those museums all day. The one in Dayton is supposed to be the biggest and the best. I'll get there one day and hit the Rock & Roll Hall of Fame too. The big one on my bucket list is the Boneyard (AMARC) at Davis Monthan AFB in Tucson. It would take me days to go thru that place. Since 9/11 they won't let tourists off the bus anymore. But I still think it's worth it to go. They filmed a scene there for the 80's movie in Can't Buy Me Love.

They have what I consider to be one of the most amazing WWII planes there, the Corsair F4U.  It's positioned beautifully on wires in a flight position.  I'll see if I can dig up some photos of it.  They don't have a Zero there.  They do have a Black Widow, which seems like it is all engine with just enough fuselage to hold it together.  There are some Vietnam era helicopters as well, which I think are amazingly versatile machines.  What's cool is my wife's father worked on those as an engineer.

There's a few WWI planes there, but the really, really early French ones and not the English or American ones.  I'd like to see some of those.  I used to build a replica (actually a reproduction) of the Waco YMF-5 that wasn't too dissimilar from the Hawker and Stearman models used by the Army Air Force late in the war.

I think what I liked about WWII is that they went into the war flying open cockpit, skin on frame biplanes and went out flying jets - in six years time (counting the China campaign).  Oh sure, there were some metal skin monoplanes, but biplanes were common for scouting and training.

There's also a lot of commercial craft.  Here's two pictures with my Dad.  In one he's by a Cub.  He was the structures engineer for its restoration and he sat in its cockpit.  The second is him by an Apache, which for a time was the world's most successful twin engine light craft.  Dad was on the design team for that plane.  A lot of guys were, but as far as I'm concerned that's one of Dad's planes.  The particular plane in the photo has over 100,000 hours, and it was flown by the owner to Dulles airport when he donated it to the museum.  Dad laughed when he read it and said, "I bet those aren't the original engines!"   The pictures aren't too good, but I like bragging on my Dad. I love that old WWII iron!  My favorite plane of that era was the F4-U Corsair.  One BAD plane to tangle with, if you could get 'em back on the ground without crashing.  I understand visibility was a nightmare when landing!

The Corsair was so cool that they made a TV show about it. Black Sheep Squadron. I remember liking it. Of course the planes were awesome.

Love the B-17 too.  What a tough, graceful work of art that plane was.  The B-29 was also an awesome machine...pinnacle of piston engine aircraft design.  Years ago, way back in the '80's, I was lucky enough to watch "Fifi" as she flew over Flathead Lake in Montana, flying from an airshow in Missoula to another airshow in Kalispell.  She was about a mile away, maybe only 1,000 feet up...heard the engines for 5 minutes before we could see it.  What a sight!

Looks like a great place to spend a few hours. I have loved WWII aircraft for as long as I can remember and it is always good to see them up close. I took my dad to the RAF museum at Hendon in London last July for his birthday and for us old warplane nuts it's just heaven!!
They have at least one example of almost every airframe used by the RAF since it's inception including the RFC days when it was still officially a branch of the army. They also have a large selection of the German WWII aircraft including a Stuka and the early jets. The place is huge and is probably the only place where you can walk around a B17 and a Lancaster parked side by side with a Vulcan jet bomber just behind. An awesome sight. If you are ever in the UK it's well worth a visit but you need a whole day or you won't get around it all.

"We cannot hold a torch to light another's path without brightening our own." (Ben Sweetland)

One of the great moments of my life was getting to meet Jimmy Doolittle on the 50th anniversary of his raid over Tokyo.  I was stationed on the USS Ranger in Sand Diego, and the ship had loaded the surviving members of the raid and a couple of B-25s on board.  The Ranger then pulled out to sea, launched the aircraft which flew over General Doolittle's house (he lived in San Diego) and dropped confetti on it. 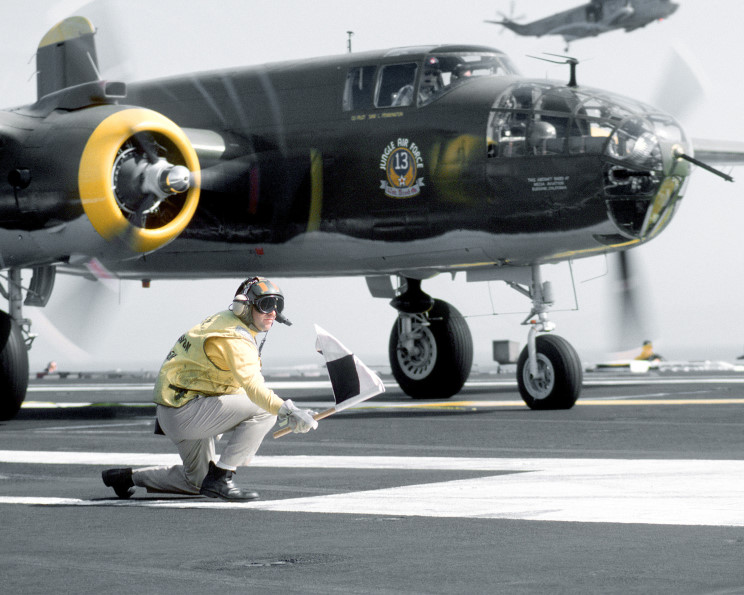