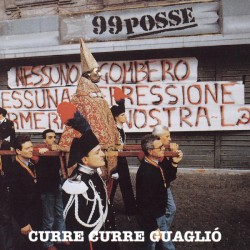 99 Posse is an Italian hip hop/reggae group from Naples. It raps both in Italian and in the local Naples dialect. Most of 99 Posse’s songs deal with political or social issues, and the group members are considered left-wing hardliners. As a showing of their activism, all of the group’s albums have been released with a prezzo politico ("political price"): each CD displays a sticker saying "Don’t pay more than...". For 99 Posse, this means "putting into practice a specific understanding about their relationship with the market, a sort of ideal practice." The group has gained popularity in Italy through its songs and its voicing of progressive political causes.

Its first album, Curre Curre Guagliò (1993), was mainly influenced by reggae and world music. Subsequent albums, Cerco Tiempo (1996) and Corto Circuito (1998), included new styles like drum ’n bass and trip hop. Curre Curre Guaglio was self-produced, but rose from its underground status to become an iconic album and cultural manifesto that eventually inspired the film Sud by Oscar-winning director Gabriele Salvatores. The group also has its own record label, Novenove, which works to promote underground artists.

On July 18, 2009 they came back without Meg in Naples, during a concert created by movements against repression and the blocking of 21 activists for G8 in Turin’s university.