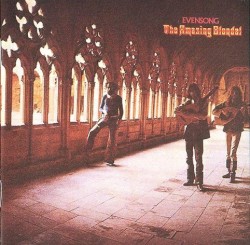 Amazing Blondel are an English acoustic progressive folk band, containing Eddie Baird, John Gladwin, and Terry Wincott. They released a number of LPs for Island Records in the early 1970s. They are sometimes categorised as psychedelic folk or as medieval folk rock, but their music was much more a reinvention of Renaissance music, based around the use of period instruments such as lutes and recorders.