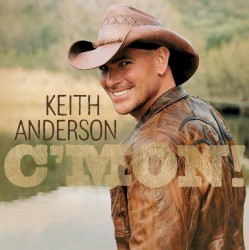 Keith Anderson (born January 12, 1968) is an American country music artist. Before signing to a record deal, Anderson was one of several co-writers on "Beer Run (B Double E Double R-U-N)", a duet by Garth Brooks and George Jones, released in late 2001. Anderson was signed as a recording artist to Arista Nashville in 2004. His debut single "Pickin’ Wildflowers" was released that year, as the lead-off track from his debut album Three Chord Country and American Rock & Roll. Counting "Pickin’ Wildflowers", the album produced a total of four hit singles on the Billboard Hot Country Songs charts, and was certified gold by the RIAA.

In addition to his own material, Anderson co-wrote Big & Rich’s single "Lost in This Moment", a Number One hit on the country music charts in mid-2007. Anderson switched to the Columbia label in 2007, and his second album, C’mon!, was released on August 5, 2008. The second single from the album, "I Still Miss You", became his first Top 5 country hit.

His latest release is a six-song EP album titled I’ll Bring the Music; it was released May 12, 2015.