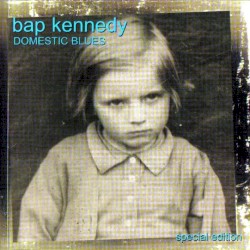 Martin Christopher Kennedy (17 June 1962 – 1 November 2016), known as Bap Kennedy, was a singer-songwriter from Belfast, Northern Ireland. He was noted for his collaborations with Steve Earle, Van Morrison, Shane MacGowan and Mark Knopfler, as well as for writing the song "Moonlight Kiss" which was on the soundtrack for the film Serendipity.Kennedy was in the rock band Energy Orchard for many years and also recorded a number of well-received solo albums including Domestic Blues, The Big Picture, The Sailor’s Revenge, Let’s Start Again and Reckless Heart. During his solo career, Kennedy performed, wrote and recorded songs with artists such as Steve Earle (on Domestic Blues), Van Morrison (on The Big Picture) and Mark Knopfler (on The Sailor’s Revenge). Following the releases of The Big Picture and The Sailor’s Revenge, he toured the US and Europe with Mark Knopfler of Dire Straits, who also produced Kennedy’s 2012 album The Sailor’s Revenge.