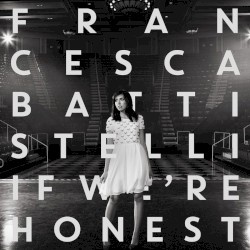 Francesca Battistelli (born May 18, 1985) is an American Christian singer and songwriter from New York City. She was originally an independent artist and had released an independent album, Just a Breath, in 2004. Her first studio album on Fervent Records, My Paper Heart, was released on July 22, 2008. Her first single, "I’m Letting Go", was released to radio stations on July 15, 2008, and charted on national Christian CHR charts. The song was the 16th most played song of 2008 on Christian radio stations according to R&R magazine. Battistelli received her first Grammy Award nomination in 2009, for Best Gospel Performance with her single, "Free to Be Me". She later received her first Grammy Award in 2016 at the 58th Annual Grammy Awards for Best Contemporary Christian Music Performance/Song with her single "Holy Spirit" from her album If We’re Honest.