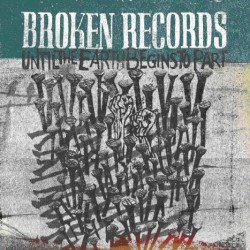 Broken Records are a band from Edinburgh, Scotland, which formed in December 2006. The band are signed to 4AD and released their debut album, Until the Earth Begins to Part, in June 2009. Their second album Let Me Come Home was released in October 2010, and their third Weights and Pulleys in May 2014.