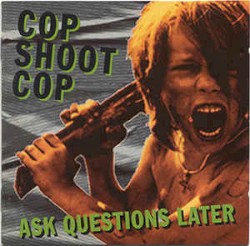 Cop Shoot Cop was a rock music group founded in New York City in 1987. They disbanded in 1996. The band were frequently classified as industrial rock, but were often quite different from many bands so dubbed: having a distinctive instrumental lineup that encompassed twin bass guitars, found metal percussion, and no lead guitar. The group had little mainstream success (scoring a few hits on college radio), despite tours with Iggy Pop and music videos on MTV’s Headbangers Ball and 120 Minutes (notably for "$10 Bill", featuring a number of little people). They retain a cult following--their out-of-print releases sometimes sell for large amounts.