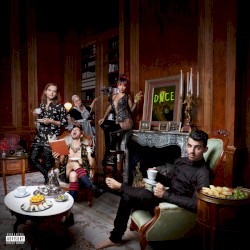 DNCE was an American dance-rock group. The group consisted of vocalist Joe Jonas, drummer Jack Lawless, bassist and keyboardist Cole Whittle, and guitarist JinJoo Lee. The group signed with Republic Records, who released their debut single, "Cake by the Ocean", in September 2015. The song reached the top 10 on several charts, including on the US Billboard Hot 100, where it peaked at No. 9. Their debut extended play, Swaay, was released about a month later. Their self-titled debut studio album was released in November 2016. They were also nominated for Favorite New Artist for the 2016 Kids’ Choice Awards and Best Song to Lip Sync and Best Anthem for the 2016 Radio Disney Music Awards. The group performed at the 2017 Fashion Meets Music Festival.

Following the reunion of the Jonas Brothers in 2019, the group has entered an indefinite hiatus.