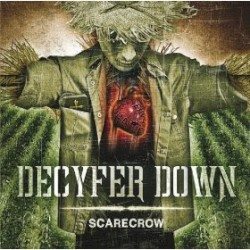 Decyfer Down is an American Christian rock band formed in 1999 and based in Morehead City, North Carolina, United States. Until 2002 – the year that Christopher Clonts joined the band – they went by the moniker Allysonhymn (pronounced All-eyes-on-Him). Decyfer Down is well known in Christian music, but the band is also known for their mainstream success, having toured with bands like Puddle of Mudd and Breaking Benjamin.