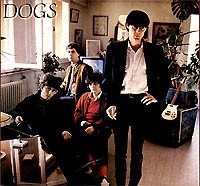 Too Much Class for the Neighbourhood (1982)

Dogs (aka Les Dogs) were a French punk rock/new wave band from Rouen, formed in 1973. Allmusic describes them as a "treasured cult band". Following two EPs in 1977/1978, their debut album Different was released in 1979 on Mercury Records; Different Shadows followed in 1980. The band continued with various line ups, releasing ten more albums before the death of vocalist - and only constant member - Dominique Laboubée, in 2002.