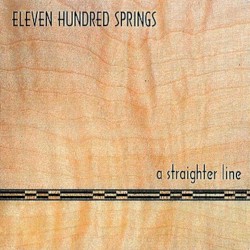 Eleven Hundred Springs was founded by Matt Hillyer (lead vocalist, guitar, primary songwriter), Steven Berg (bass), and Richie Vasquez (drums) in 1998. Prior to forming Eleven Hundred Springs, Matt and Steven had played together in three previous bands, most notably the Dallas rockabilly band Lone Star Trio. The band’s early days included a lengthy Monday night residency at Adair’s in Deep Ellum. It was during this time that the band’s first album, "Welcome To Eleven Hundred Springs," was recorded, as well as "Live At Adair’s".

Over the years, the band has had several lineup changes, with key band member Jordan Hendrix joining the group in 2006.

The most recent lineup has been in place since October 2016.

On June 9, 2021, lead singer/songwriter Matt Hillyer announced via his Facebook page that, “with bittersweet feelings that we’ve decided to bring the band to an end.”