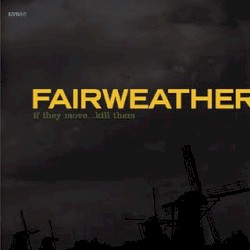 Fairweather is an American rock band from Virginia, United States. They have released three full-length albums on Equal Vision Records: If They Move...Kill Them (2001), Lusitania (2003) and Fairweather (2014). The band also released several demos and the Alaska EP. In March 2011, after an 8-year hiatus, Fairweather formally announced a reunion show. The reunion show took place May 14, 2011 at the Black Cat in Washington, DC. The band continued with further shows since the reunion and subsequently recorded and released their third album in April 2014.