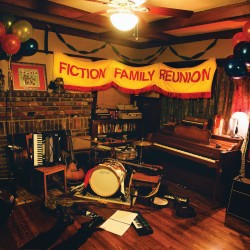 Fiction Family is a musical collaboration between Switchfoot frontman Jon Foreman and Nickel Creek guitarist Sean Watkins. The duo’s self-titled, full-length album was released on January 20, 2009. The band has since added a drummer and a bassist, Tyler Chester and Aaron Redfield.

According to Watkins, the band’s name comes from the fact that "Usually when two guys make a record together, it sounds cool to call them the something brothers. But we’re not, so that’s how Fiction Family came to be." Says Foreman, "They are two words that hold a lot of meaning for me. I think that much of who we are as a culture lean towards fiction. As for the family of it, you have the entire nation that’s kind of looking for family. That’s one of the reasons why I like the name. Also both of us come from sibling bands and this is not a sibling band, so this is kind of a fiction family of sort."