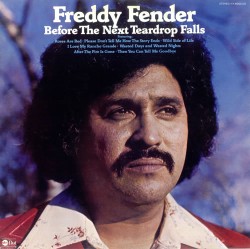 Before the Next Teardrop Falls (1974)

Freddy Fender (born Baldemar Garza Huerta; June 4, 1937 – October 14, 2006) was a Mexican American Tejano, country and rock and roll musician, known for his work as a solo artist and in the groups Los Super Seven and the Texas Tornados. He is best known for his 1975 hits "Before the Next Teardrop Falls" and the subsequent remake of his own "Wasted Days and Wasted Nights".