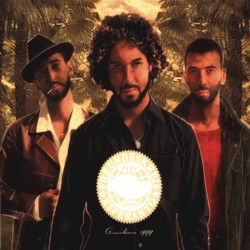 Freundeskreis (meaning "Circle of Friends") also known as FK, were a German hip hop group from Stuttgart. They performed songs in German, English, French and Esperanto. The members were Max Herre, Don Philippe and DJ Friction.

They were a socially conscious German rap group that released three top twenty albums. Rapping in several languages is common in German hip hop. One of their early albums, Krauts with Attitude, contained only three songs in German with eleven in English and one in French.