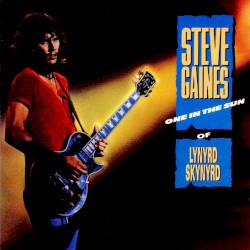 Steven Earl "Steve" Gaines (September 14, 1949 – October 20, 1977) was an American musician. He is best known as a guitarist, vocalist and songwriter with rock band Lynyrd Skynyrd from 1976 until his death in the October 1977 airplane crash that claimed other band members and crew. He was the younger brother of Cassie Gaines, a backup vocalist with the band.