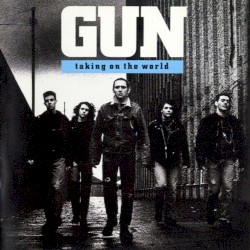 Gun are a hard rock band from Glasgow, Scotland. The band currently consists of brothers Dante Gizzi (lead vocals) and Giuliano "Jools" Gizzi (guitar), along with Paul McManus (drums), Andy Carr (bass) and Tommy Gentry (guitar). Starting in 1989 with Taking on the World, Gun have released seven studio albums, three of which have made the UK Top 20, and had eight UK Top 40 hit singles. The most successful of these was a cover of Cameo’s "Word Up!", which reached the top 10 in 1994.Fronted by Mark Rankin for their first four albums, the band disbanded in 1997, but reformed in 2008 with Little Angels singer Toby Jepson taking over lead vocals. After recording a new EP in 2009, Jepson left the band the following year, and Dante Gizzi moved from bass to become Gun’s new lead singer. With this new lineup, Gun released three more albums in the 2010s: Break the Silence (2012), Frantic (2015) and Favourite Pleasures (2017), which became their first top-20 album since 1994.The band continues to tour and record, and recently celebrated their 30th anniversary in 2019 with a new compilation album, R3L0ADED, and a sold-out show at Glasgow’s Barrowland Ballroom.