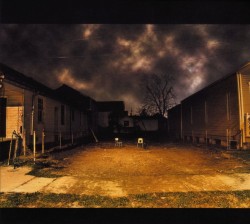 The Gutter Twins was a musical collaboration between rock musicians Greg Dulli and Mark Lanegan. Dulli and Lanegan had regularly contributed to each other’s projects since 2000, most notably in Dulli’s Twilight Singers; of the duo’s origins, Dulli said "I think Mark told a journalist we were doing it, and then the journalist called me, and I didn’t know we were doing it." On Christmas Day 2003, Dulli and Lanegan began work on the collaboration. Their name is a punning homage to The Glimmer Twins, the pseudonym used by Mick Jagger and Keith Richards for work producing recordings by The Rolling Stones.