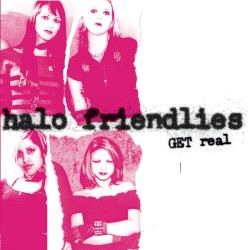 The Halo Friendlies were an American all-girl pop punk band from Long Beach, California, United States. After snatching up a guitar in a thrift shop while on her first date with then-boyfriend now-husband Matt Wignall of Havalina/Matt Death and the New Intellectuals, Judita Wignall made the decision to start a band. Originally featuring Wignall on lead vocals and guitar, Cheryl Hecht on guitar, Natalie Bolanos on bass guitar, Tafida Allen on drums, and Deanna Moody on percussion on their 1998 self-titled debut, by 1999’s Acid Wash, Hecht had dropped out of the project. She was then replaced by Ginger Reyes, who not only began sharing lead vocals with Wignall, but also took up bass guitar, allowing Bolanos to switch to lead guitar. In 2000 the Halo Friendlies replaced Moody with Christina Hock (Theobald). Theobald/Hock, however, was replaced shortly before the band’s first sweep of the United Kingdom in 2003 by Claudia Rossi (ex-Jack Off Jill).

Currently, the band is on an indefinite hiatus to allow its members some time for solo creative efforts.

From April 2007 until March 2010, Ginger Reyes played bass guitar for The Smashing Pumpkins.