The Secret of My Excess () 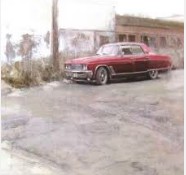 Ronald James Hawkins (born 1964) is a musician from Toronto who is best known as a member of the band The Lowest of the Low. He has also released music as a solo artist, and fronted the bands Ron Hawkins and the Rusty Nails and Ron Hawkins and the Do-Good Assassins. He has produced albums for multiple independent bands and artists and is also an accomplished painter.