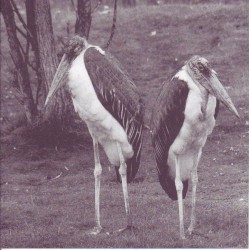 Jarkko Martikainen (born October 24, 1970 in Greifswald, GDR) is a Finnish singer, songwriter and member of the rock band YUP. In addition to his musical career, Martikainen has worked as a columnist, a record producer and a documentary filmmaker. Martikainen has also illustrated his first solo-album Mierolainen (2004) and YUP’s third album, Toppatakkeja ja Toledon terästä (1994).

Martikainen has a very versatile and distinct voice. His lyrics are satirical and have taken lots of influence from old Russian authors like Mikhail Bulgakov and especially Daniil Harms. Martikainen’s lifestyle could be described as "a bit of a Tolstoyan".

In 2005, Martikainen published a collection of short stories, Pitkät piikit ja muita kertomuksia, which, among other things, criticizes modern lifestyle and consumerism.