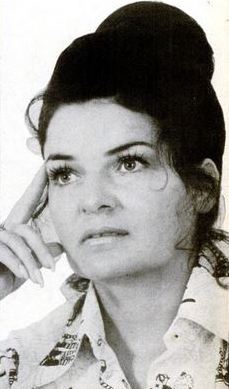 Jeanne Pruett (born Norma Jean Bowman; January 30, 1937) is an American country music singer and songwriter. She also has credits as a published author. Pruett had several major hits as a music artist, but became best-known for 1973’s "Satin Sheets". The song topped the country music charts and helped her secure a membership in the Grand Ole Opry cast.

Pruett was raised near Pell City, Alabama and grew up with a large family. She performed with her family from an early age and learned several musical instruments. She married guitarist Jack Pruett before turning 20 years old. Soon after, the couple moved to Nashville, Tennessee, where he was hired to play guitar for country artist Marty Robbins. In the early 1960s, Pruett devoted more time to writing her own songs. Her material was heard by Robbins who recorded her early work. Her writing helped her gain her first recording contract with RCA Victor in 1963. After limited success she moved to Decca/MCA Records where 1971’s "Hold on to My Unchanging Love" became her first charting single on the Billboard country list. Pruett’s debut studio album was then released the following year.

In 1973, Pruett recorded "Satin Sheets" and the song became her biggest hit. An album of the same name topped the country albums chart and she was nominated for several major awards from the Academy of Country Music and Country Music Association. In July 1973, Pruett was made a member of the Grand Ole Opry and became a frequent performer on the broadcast for several decades. She had further hits following "Satin Sheets" with the songs "I’m Your Woman" and "You Don’t Need to Move a Mountain". During the remainder of the 1970s, Pruett continued releasing material with little success. In 1979, Pruett returned with her fifth studio album. The record spawned three songs that became top ten hits on the country charts, including 1980’s "Temporarily Yours".

Pruett continued recording and releasing music throughout the 1980s. Her sixth (and final) studio release was a self-titled effort in 1985. The following year, she was part of the Grand Ole Opry’s first all-female segment. The same year, she began a second career as an author of cookbooks. In 1986, Pruett published the first in a series of works entitled Feedin’ Friends. She also hosted her own cooking show on The Nashville Network during this time. Pruett continued performing into the early 2000’s before officially retiring in 2006.