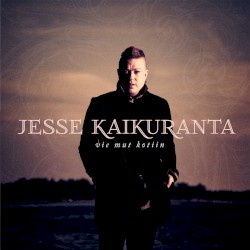 Jesse Kaikuranta (born 13 April 1982 in Mariehamn, Åland Islands, Finland) is a Finnish singer. He spent his childhood in Ähtäri, but resides in Kokkola. While working as a qualified singing instructor, he took part in The Voice of Finland in 2012, the inaugural season of the show in Finland. In the blind audition stage broadcast on 20 January 2012 he auditioned with "The Edge of Glory" by Lady GaGa. Two of the four judges turned their chairs. He picked Paula Koivuniemi to be his mentor. He proceeded through various stages of the show to reach the Final 4, where he sang "Vie mut kotiin" as his choice for winning single. He finished 3rd/4th with Mikko Sipola winning the title and Saara Aalto as runner-up.

Despite his failure to win the title, Kaikuranta gained great popularity in Finland. He signed with Universal Music Finland and his song "Vie mut kotiin" charted on the Finnish Singles Chart reaching number 11. On the Official Finnish Download Chart, the song peaked at number one.

His debut album, also titled Vie mut kotiin, was released on 2 November 2012 and went straight to number one on the Official Finnish Album Chart selling platinum. The album was produced by Matti Mikkola and Eppu Kosonen and includes work by Aki Tykki, DJPP, Paula Vesala, Freeman and Hector. The follow-up single "Järjetön rakkaus" was released on 14 November 2012 and the third single "Näytän sulle rannan" on 25 January 2012.