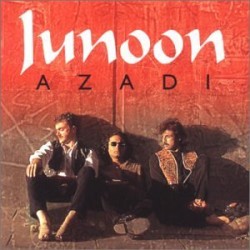 Junoon (Urdu: جنون‎ transl. Obsession/Passion) is a Pakistani sufi rock band from Lahore, Punjab, Pakistan, and Tappan, New York, formed in 1990. The band is directed by founder, lead guitarist and songwriter, Salman Ahmad, who was soon joined by keyboardist Nusrat Hussain, bass guitarist Brian O’Connell and vocalist Ali Azmat. Junoon is Pakistan’s and one of South Asia’s most successful bands; Q magazine regarded them as "One of the biggest bands in the world" and The New York Times called Junoon "the U2 of Pakistan". Since their inception, the group has released a collective total of nineteen albums: seven studio albums; one soundtrack; two live albums; four video albums; and five compilations. They have sold over 30 million records worldwide.Pioneers of Sufi rock with an original sound, they achieved success during the early 1990s. Its members were signed to major record label EMI Records and afterwards released their self-titled debut album Junoon in 1991. After two years, the band recorded their second album Talaash (1993) with their new bassist Brian O’Connell after Nusrat Hussain left the band. The release of their second album began to create a cult following for the band. In 1996, Junoon released their third album Inquilaab, and it was only then that Junoon developed a nationwide fan following, with blending rock guitars and bluesy vocals with Eastern elements like the use of tablas, raga-inspired melodies, traditional Pakistani folk music, and Eastern-inspired poetry. The following year, the band recorded the critically acclaimed Azadi (1997), being the band’s first international record deal, and making it Junoon’s debut album in neighbouring India. The band went on to record and release Parvaaz in 1999. The band found renewed success and popularity starting with 2001’s Andaz and through 2003’s Dewaar and their supporting tours. Junoon celebrated their 25th anniversary by releasing their eighth studio album titled Door in 2016.