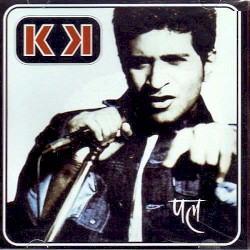 Krishnakumar Kunnath (popularly known as KK, K.K. or Kay Kay) (born 23 August 1968) is an Indian singer. He is a prominent singer in Hindi, Tamil, Telugu, Kannada, Malayalam, Marathi, Bengali and Gujarati languages films. KK is noted for his clear and soothing voice; broad vocal range and noteplay. He is considered as one of the most versatile singers of India.