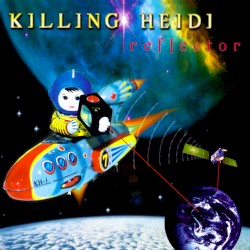 Killing Heidi are an Australian rock band formed in Violet Town, Victoria in 1996, initially as a folk-pop duo by siblings, Ella and Jesse Hooper. The band has released three studio albums, Reflector (March 2000), which reached No. 1 on the ARIA Albums Chart, Present (October 2002) and Killing Heidi (August 2004). Their top 20 singles are "Weir" (October 1999), "Mascara" (November, No. 1 on ARIA Singles Chart), "Live Without It" (April 2000), "Outside of Me" (September 2002) and "I Am" (July 2004). At the ARIA Music Awards of 2000 they were nominated in seven categories and won four trophies: Album of the Year, Best Group, Breakthrough Artist – Album and Best Rock Album for Reflector. At the APRA Music Awards of 2001 Ella and Jesse Hooper won Songwriter of the Year. The group disbanded in 2006, with Ella and Jesse taking a lower profile with an acoustic folk duo, The Verses. Ella also has a career as a solo performer, radio presenter and TV personality. Jesse has a career as a music teacher, producer and community arts developer. In 2016, it was announced that the band would be reforming to celebrate its 20th anniversary.