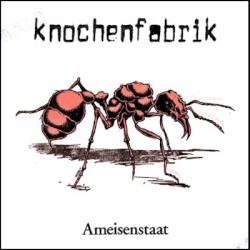 Later in 1996 Gagi left the band and was replaced by Hasan Onay. During the period between 1996 and the ultimate disbanding in 1998, the released two LPs, Ameisenstaat and Cooler Parkplatz and two EPs Elvis & Kaufehlermessung. In 2001 a German punk label released a compilation with the best-known Knochenfabrik songs and some live songs, the compilation was titled Deutschmark muss sterben.

In 2008, the band reunited after 10 years, 3 years later, the band’s first album since Cooler Parkplatz was released, it was titled Grüne Haare 2.0 (lit. Green Hair 2.0).