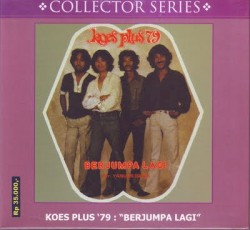 Koes Plus, formerly Koes Bersaudara (Koes Brothers), is an Indonesian musical group that enjoyed success in the 1960s and 1970s. Known as one of Indonesia’s classic musical acts, the band peaked in popularity in the days far before the advent of private television companies, delivering stripped-down pop and rock songs at the then-only TV station, TVRI.