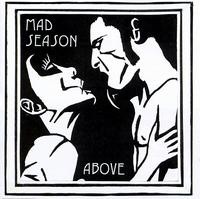 Mad Season was an American rock supergroup formed in 1994 as a side project of members of other bands in the Seattle grunge scene. The band’s principal members included guitarist Mike McCready of Pearl Jam, lead singer Layne Staley of Alice in Chains, drummer Barrett Martin of Screaming Trees and bassist John Baker Saunders. Mad Season released only one album, Above, in March 1995. Its first single, "River of Deceit", was a radio success, and Above was certified a gold record by the RIAA in June.

The band went on a semi-permanent hiatus in 1996 due to the band members’ conflicting schedules and vocalist Layne Staley’s problems with substance abuse. Attempts were made in the late 1990s to revive the group without Staley, and material for a follow-up release to Above had been worked on; however, the band dissolved following the death of bassist John Baker Saunders in 1999 from a drug overdose. Staley, too, died of a drug overdose three years later. Martin and McCready have since made two short partial reunions, one in 2012 and one from 2014 to 2015. A special edition box set containing a remastered edition of Above and various unreleased material was released in March 2013.