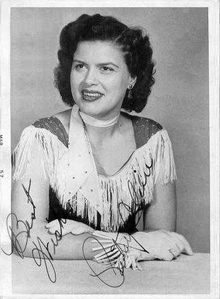 Patsy Cline (born Virginia Patterson Hensley; September 8, 1932 – March 5, 1963) was an American country music artist. She is considered one of the most influential vocalists of the 20th century and was one of the first to successfully crossover into pop music. Cline recorded several songs that became major hits during her eight-year career, including 2 number-one hits on the Billboard Hot Country and Western Sides chart.

Cline’s family eventually settled in Winchester, Virginia. Her first professional performances began at the local WINC radio station when she was fifteen. In the early 1950’s, Cline began appearing in a local band led by performer Bill Peer. Various local appearances led to featured performances on Connie B. Gay’s Town and Country television broadcasts. It also led to the signing of her first recording contract with the Four Star label in 1954. She had minor success with her earliest Four Star singles including "A Church, A Courtroom and Goodbye" (1955) and "I’ve Loved and Lost Again" (1956). In 1957 however, Cline made her first national television appearance on Arthur Godfrey’s Talent Scouts. After performing "Walkin’ After Midnight", the single would become her first major hit on both the country and pop charts.

Cline’s further singles with Four Star Records were unsuccessful, although she continued performing and recording. After marrying in 1957 and giving birth in 1958, she moved to Nashville, Tennessee to further her career. Working with new manager Randy Hughes, Cline would become a member of the Grand Ole Opry and then move to Decca Records in 1960. Under the direction of producer Owen Bradley, her musical sound shifted and she achieved consistent success. The 1961 single "I Fall to Pieces" would become her first to top the Billboard country chart. As the song became a hit, Cline was severely injured in an automobile accident, which caused her to spend a month in the hospital. After recovering, her next single release "Crazy" would also become a major hit.

Between 1962 and 1963, Cline had hits with "She’s Got You", "When I Get Through with You", "So Wrong" and "Leavin’ on Your Mind". She also toured and headlined shows with more frequency. In March 1963, Cline appeared at a benefit show in Kansas City, Missouri. To return home, she boarded a plane along with country performers Cowboy Copas, Hawkshaw Hawkins and manager Randy Hughes. Upon hitting rough weather, the plane crashed outside of Camden, Tennessee, killing all those onboard.

Since her death, Cline has been cited as one of the most celebrated, respected and influential performers of the 20th century. She has also been seen as a forerunner for women in country music for being among the first to sell records and headline concerts. Her music has also influenced performers of various styles and genres. In 1973, she became the first female performer to be inducted into the Country Music Hall of Fame. In the 1980s, she was portrayed twice in major motion pictures, including the 1985 biopic Sweet Dreams starring Jessica Lange as Cline.