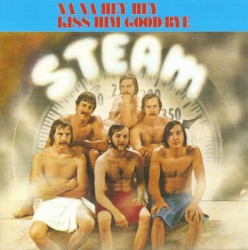 Steam was a pop-rock music group best known for the 1969 number one hit song "Na Na Hey Hey Kiss Him Goodbye." The song was written and recorded by studio musicians Gary DeCarlo, Dale Frashuer, and producer/writer Paul Leka at Mercury Records studios in New York City. The single was attributed to the band "Steam" although at the time there was actually no band with that name. Paul Leka and the studio group recorded the first album.