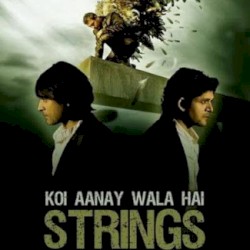 Strings (Urdu: اِسٹرنگز‎) are an internationally acclaimed Pakistani pop rock band composed of two members, plus four live band members from Karachi, Pakistan. The band was initially formed by four college students—Bilal Maqsood (vocals and guitars), Faisal Kapadia (vocals), Rafiq Wazir Ali (synthesizer) and Kareem Bashir Bhoy (bass guitar)—in 1988. In 1992 the quartet disbanded, only to make a comeback with Maqsood and Kapadia in 2000. While the initial band rode the new wave of Pakistani pop music, the later lineup ushered a revival in the Pakistani music industry.

In 1990 the band signed with EMI Records and released their debut album, Strings. Their initial experiments with synthesised sounds and rhythms were not immediately recognised, although Strings sold 20,000 copies during its first week after release. Two years later the band released their second album, 2, which included the critically acclaimed single "Sar Kiye Yeh Pahar". The song was first aired on MTV Asia, and led the band to widespread fame. After the release of 2, the quartet disbanded to focus on their studies and careers. In 2000 Maqsood and Kapadia released Duur, which revived the band’s popularity, and followed it with Dhaani in 2003. This album included the single "Najane Kyun", which was part of the soundtrack for the Hollywood film Spider-Man 2. Following Junoon and Nusrat Fateh Ali Khan, Strings went to India (where they found remixes of one of their early songs playing in clubs). In 2008 Strings released their fifth album, Koi Aanay Wala Hai, with the singles "Yeh Hai Meri Kahani" and "Aakhri Alvida" (included on the soundtracks for Bollywood’s Zinda and Shootout at Lokhandwala). The album was co-produced by Bollywood actor John Abraham, and was successful in Pakistan and India.

Strings are acclaimed for their stringed rhythms and melodious, poetic songs written by Anwar Maqsood, Bilal’s father. He has been writing lyrics for the band since its re-formation, with Kapadia the lead vocalist. Bilal Maqsood composes, plays guitar and occasionally sings. Strings’ live performances are augmented by Adeel Ali on lead guitar, Shakir Khan on bass guitar, Haider Ali on keyboards and Aahad Nayani on drums. The band have sold over 25 million albums worldwide. In April 2013 Strings joined Meesha Shafi, Ali Azmat, Shahzad Hasan and Alamgir as judges on the vocal-talent show Cornetto Music Icons, aired on ARY Digital.