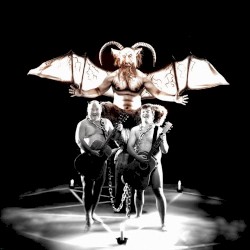 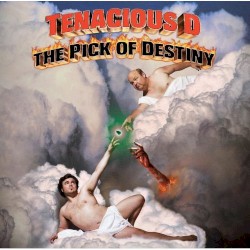 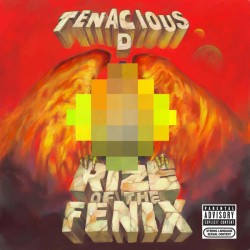 Tenacious D is an American comedy rock duo, formed in Los Angeles, California, in 1994. It was founded by actors Jack Black and Kyle Gass, who were part of The Actors’ Gang theater company at the time. The duo’s name is derived from "tenacious defense" - a phrase used by NBA basketball sportscaster Marv Albert.Prior to the release of Tenacious D’s 2001 debut album Tenacious D, the duo had a three-episode TV series released on HBO, with the episodes broadcasting between 1997 and 2000. These episodes came about after the band had met David Cross and Bob Odenkirk on the Los Angeles music scene—and Black featuring in episodes of Mr. Show with Bob and David. The band also befriended former Nirvana drummer Dave Grohl, and this would begin a working relationship between Foo Fighters and Tenacious D. Towards the end of the 1990s, the duo would go on to support large rock acts - such as Pearl Jam, Tool and Beck.In 2000 they signed with Epic Records, and the year after released Tenacious D, their debut album featuring a full band, including Grohl on the drums. The first single "Tribute" has since achieved cult-status, and made the band popular overseas, this being mainly the United Kingdom, Sweden, Ireland and Australia. In 2003, the band released The Complete Master Works, their first live concert DVD which would go on to achieve gold and platinum status by the RIAA.In November 2006, they starred in their own film Tenacious D in The Pick of Destiny, released by New Line Cinema, with Epic Records releasing the soundtrack as their second album, The Pick of Destiny. The film cost $20 million to produce, though only grossed $13.9 million at the box office and suffered mixed reviews from critics. Despite the poor receivership of the actual film, the band would near sell-out arenas on its respective tour, notably Madison Square Garden in New York and Manchester Arena in England. Following several years of sporadic festival dates and special appearances, the band released their third album Rize of the Fenix on May 15, 2012 through Columbia Records, the album making light of The Pick of Destiny’s commercial failure.In 2013, the band hosted comedy music festival, Festival Supreme in Los Angeles, which would go on to host three more editions. In 2014, the band were invited to feature on Ronnie James Dio – This Is Your Life, a compilation album where various artists cover Ronnie James Dio songs to raise funds for cancer. Their cover of "The Last in Line" won a Grammy for best heavy metal performance at the 57th Annual Grammy Awards. In 2018, the band would begin independently releasing an animatic hand-drawn web series titled, Tenacious D in Post-Apocalypto, each of the six episodes uploading exclusively to YouTube every week starting from the 28th of September. Columbia Records released the album Post-Apocalypto on November 2, 2018, just after the release of the sixth episode.Tenacious D’s music showcases Black’s theatrical vocal delivery and Gass’ acoustic guitar playing abilities. Critics have described their fusion of vulgar absurdist comedy with rock music as "mock rock". Their songs discuss the duo’s purported musical and sexual prowess, as well as their friendship and cannabis usage in a style that music critics have compared with the storyteller-style lyrics of rock opera.