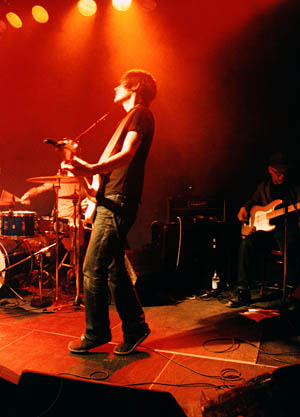 The Bear Quartet is an indie rock group from Luleå in northern Sweden. They have been playing since 1989 and have been making records at a steady rate since 1992, often to critical acclaim but never resulting in large sales.

The Bear Quartet are Mattias Alkberg on vocals and guitar, Jari Haapalainen on guitar, Peter Nuottaniemi on bass guitar, Jejo Perkovic on drums and Carl Olsson on keyboards. Peter and Mattias write the lyrics, while Mattias, Jari and Carl write the music.

The Bear Quartet have spawned many side projects. Mattias sings and plays in Mattias Alkberg BD, whose debut album Tunaskolan released in 2004 was very well received by the critics and audience. Their music can be described as classic punk/new wave in Swedish, with influences such as Tant Strul and Imperiet, both of which they have recorded cover songs of. Jari produces lots of other artists, such as Nicolai Dunger, Ed Harcourt, Camera Obscura, Kristofer Åström, The Concretes and Frida Hyvönen, and used to play with Maria from The Concretes in Heikki. Carl has Paddington DC, some kind of noise electro pop.

The name The Bear Quartet is taken from Klas Östergren’s novel Gentlemen. The album titles follow an interesting naming scheme: every title is two words, of which the first ends with a "y".

All albums, except 89 and Monty Python, are released on Skellefteå-based independent label A West Side Fabrication.