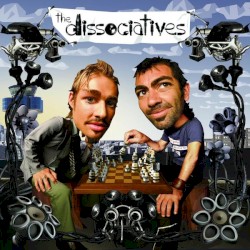 The Dissociatives were an Australian alternative rock band consisting of Daniel Johns of Silverchair and dance producer and DJ Paul Mac (of Itch-E and Scratch-E), which formed in mid-2003. They were supported by touring members, Julian Hamilton and Kim Moyes (both from the Presets), and James Haselwood. Their first single "Somewhere Down the Barrel" (March 2004) peaked at No. 25 on the ARIA Singles Chart. The duo’s debut album The Dissociatives (4 April 2004) reached No. 12 on the ARIA Albums Chart. At the ARIA Music Awards of 2004 they won two trophies; Best Cover Art for James Hackett’s work on The Dissociatives and Best Video for Hackett’s direction of "Somewhere Down the Barrel".