This Bike Is a Pipe Bomb 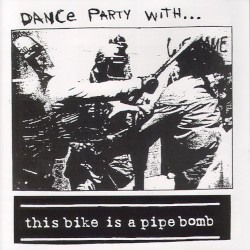 This Bike Is a Pipe Bomb were a folk punk band from Pensacola, Florida, United States. Their first recording was released in 1997 on Ghostmeat Records. Their later releases have been on Plan It X Records and No Idea Records, but now appear on their own label Plan-It X South. This Bike Is a Pipe Bomb initially started as a new wave band, with folk singer David Dondero on drums. They quickly switched to playing country music, but their punk roots were evident enough in their music that they became one of the premiere bands at the forefront of the folk-punk genre. They did several US tours including an Alaska tour 2003(?), played at Geekfest, and toured to Europe.

On February 3, 2011, This Bike Is A Pipe Bomb announced that it was ending. Rymodee and Terry still write and play together in Zippers To Nowhere, based out of Chattanooga.

Much of their music is politically oriented. This Bike Is a Pipe Bomb is staunchly pacifist and concerned with the Civil Rights Movement of the 1960s and racial equality in general.