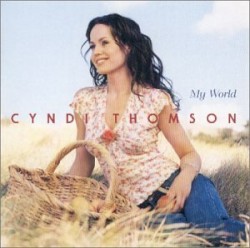 Cyndi Thomson (born October 19, 1976) is an American country music artist. Thomson wrote songs with songwriter Tommy Lee James and in 2000, she signed with Capitol Records Nashville as a recording artist. She released her first album, My World, in 2001 and her debut single, "What I Really Meant to Say", became a number one hit on the Billboard Hot Country Singles & Tracks (now Hot Country Songs) charts. She later abandoned her recording career in 2002, but resumed recording in 2006.