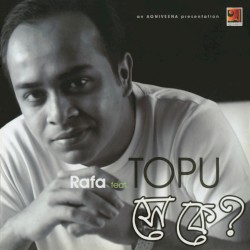 Rashed Uddin Ahmed Topu (born 2 June 1982) popularly known as Topu is a Bangladeshi musician, singer-songwriter and composer. He is the lead vocalist of ’Yaatri’, a Bangladeshi band. In 2004 Topu formed the band "Yaatri" and began his career with a compilation album Shopnochura released in 2004. He rose to fame with the release of the singles "Ek Paye Nupur". Topu signed with G-Series and released the first band album "Daak" in 2006. In 2008 he released his debut studio album Bondhu Bhabo Ki.