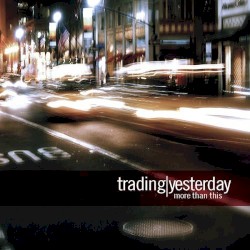 The Age of Information (formerly known as Trading Yesterday) was an American alternative rock band originally formed in 2002 by David Hodges and Mark Colbert, and later joined by Steven McMorran. In 2004, The Age of Information released a demo CD titled The Beauty and the Tragedy, and after signing with Epic Records later that year, they released their first single, "One Day", in the summer of 2005, along with an announcement for the upcoming album "More Than This". After a premature end to their contract with Epic Records, the album "More Than This" was shelved until 2011, when it was finally released independently by David Hodges’ Sleepwalker Records.