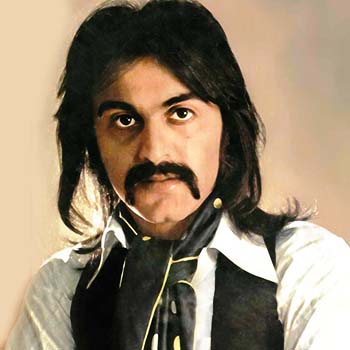 Kourosh Yaghmaei (Persian: کورش یغمایی‎ also spelled as Kourosh Yaghmaee, born 3 December 1946) is an Iranian singer, songwriter, composer and record producer, who started his career in the early 1970s. Regarded as one of the greatest Persian psychedelic rock musicians in the history of Iranian rock music, he is known as "the Godfather of Iranian psychedelic rock", as well as the "king of rock".Born in 1946 in Shahrud to Parsi parents, letter grew up in Tehran, most of his songs also a combination of Persian classical poems, his own lyrics, and contemporary poems. His styles of music come from a mix between Persian traditional music and the protein 1970s rock influenced by such as Led Zeppelin and Pink Floyd. His has significant styles in blues and rock as well as Iranian folk music. He is best known internationally for his unique presentation of the early Iranian rock throughout the 1970s. He began his solo career in 1973 with his first single "Gol-e Yakh" ("Ice Flower") was a huge success over 5 million copies sold in the domestic market. Later including this song he started solo career with the album Gol-e Yakh (1973). Several of his songs are well known by the Iranian diaspora and his hit singles such as "Gol-e Yakh", "Havar Havar" ("Shout Shout"), "Khaar" ("Thistle"), "Leila", "Paiz" ("Autumn"), "Reyhan" etc. In 2011, his first compilation album Back From the Brink: Pre-Revolution Psychedelic Rock From Iran: 1973-1979 was released by Now-Again Records. Vogue described Yaghmei as "psyche singer, stylish, moustached and funky". He was banned for 17 years since 1979.