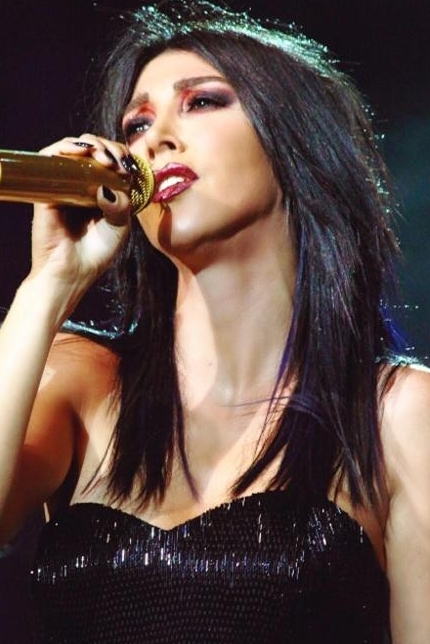 Makbule Hande Özyener (born 12 January 1973), better known by her stage name Hande Yener, is a Turkish singer. She made her debut in the early 2000s, and since then has become a prominent figure of Turkish pop music with numerous songs that rose to the top of music charts. Alongside her music career, she is also known for her choice of clothes and has renewed her image multiple times over the years. She has occasionally made changes in her music style as well; for a while, she started making electronic music, but this period was short-lived and she again returned to performing pop music. During her career, both her professional and personal life have been among the favorite subjects of columnists, and her rivalry and on and off feud with Demet Akalın were covered in the tabloids from time to time.

Yener was born in Kadıköy, Istanbul. After finishing her middle school she decided to go to a conservatory, but after facing objections from her family, she enrolled in Erenköy Girls High School. She left the school while in the second grade and got married. To achieve her dream of becoming a singer, she tried to get in contact with Sezen Aksu, and while she was working as a shop assistant she met Hülya Avşar who later introduced her to Aksu. She worked as Aksu’s backing vocalist for a while, before working with Altan Çetin who helped her with preparing her first studio album, Senden İbaret, which was released in 2000. She later released the MÜ-YAP certificated album Sen Yoluna... Ben Yoluma... (2002), followed by Aşk Kadın Ruhundan Anlamıyor (2004) and Apayrı (2006). These albums made her one of the successful artists inside Turkey in the 2000s. With the album Nasıl Delirdim? (2007), she shifted her style to electronic music and distanced herself from pop music for a while. During this period, which formed the first decade of her career, many of her songs became great hits, including "Yalanın Batsın", "Sen Yoluna... Ben Yoluma...", "Acele Etme", "Kırmızı", "Kelepçe", "Aşkın Ateşi", "Kibir" and "Romeo".

Although Yener’s electronic songs received critical praise, she suffered commercial loss compared to her previous works, which resulted in several problems with her producing partners, causing a change in the production company and label twice. Hence, Yener’s era of electronic music ended in a few years and with the pop album Hande’ye Neler Oluyor? (2010) she returned to pop music charts. The pop albums released in this phase of her career were often compared to her initial albums, and although they received mixed reviews in general, many of their songs, especially the ones from Mükemmel (2014) and Hepsi Hit (2016–17) managed to top the music charts in Turkey. Among these songs were "Bodrum", "Ya Ya Ya Ya", "Naber", "Sebastian", "Mor", "Bakıcaz Artık" and "Beni Sev".

Throughout her career, Yener has been influenced by a number of artists, including Madonna to whom her image, clips and performances were often compared. In the 2000s, she was one of the few artists who had an album that successfully sold over 1 million copies in Turkey. In 2013, she was the Turkish singer whose music videos were viewed the most on YouTube. By the end of the 2000s, she was known as a gay icon inside Turkey, and made some statements demanding the advancement of LGBT rights in Turkey, but she became the target of criticism after being silent about LGBT issues in the following years. In the second half of the 2010s, she expanded the scope of her work and worked periodically as the operator of various night clubs. Yener has received five Golden Butterfly Awards, as well as four Kral Turkey Music Awards and has received various other awards and nominations.