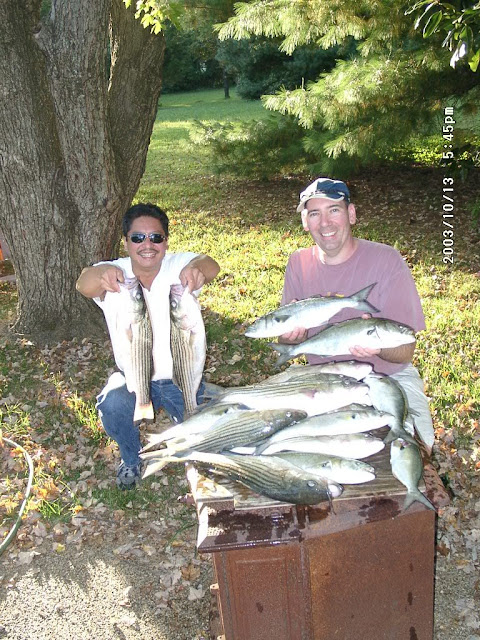 That is a great picture. Prayers sent.

Check out the video I loaded on FB.  It was taken six years later than this picture - doing the same thing of striped bass fishing.  That smile never left his face in the whole six years.  [Insert most violent and hateful curse word you know here] cigarettes.   I'm sick of losing people to them.

Sorry to hear of your loss buddy.

That's gotta be one of the hardest things about getting older.... losing friends and family to one thing or another, and so much more the pity if they are called earlier than expected.

My thoughts and prayers are with you.

Speaking from experience I know how hard it is to lose friends. In the past two years alone I've attended three funerals for people that I was proud to call friend. It's never easy but now I think back on the positive things and realize how blessed I really was. My thoughts and prayers are with you Zurf, may the good times you two shared live on in your heart and memory forever. Take care

Deepest sympathies from here, Zurf.
Our prayers are with you.

Our thoughts are with you and your friend's family Zurf!

Thanks for the sympathy and prayers.  I wish this wasn't a virtual community as I'm running short of friends.  For reasons I'd rather not go into on a public forum, I felt compelled to leave my church earlier this week - and now this.  I'm a bit scared of what the third thing will be as it seems that bad news always comes in threes.

Oh my... YUCK... it does tend to come in threes yes, although sometimes bad news can be a blessing in disguise so perhaps the church issue is one of those and your friend's passing is a lonely fluke that is not to carry two others with it.  Thinking positive thoughts because if you believe it, you can make it happen (sometimes... whatever it is).

I am one who believes that life is constantly throwing challenges at us.  The "rule of three" is probably just a constant in our ups and downs and some seem bigger than others and can therefore be labeled as one of three.  I prefer to take stock in the abilities we have to move on, make choices and overcome those harsh things we encounter in our daily lives.  If we dwell too long on anything, something else steps up; so let us all attack the good of our life with a gusto and be thankful for all the joys we have while we navigate the potholes of the road we travel.  Some things which initially look bad can be turned around and made to be a positive; but we have to be open-minded enough to look for the good and not allow ourselves to get stuck in the bad.

Look at all the positives you have in life; those still around you and with you who support your path forward.  Change is hard, but there really is good that can come of it.  There are other churches who are willing to accept you and friends remaining to share the void left by losing one of them.  Go meet someone new!  I think a stranger is just somebody I have yet to meet.  Who of us knows when the next person we meet might turn into a lifelong companion if we will only take that step.  I am a firm believer in "Finding a Path or Making One."    Accentuating the positive gets me out of bed each morning even when life is dumping on me in some way.  Go for it!

Zurf my sincere condolences on the passing of your friend God be with you.

Sorry for your loss, prayer sent,

one caper after another

Sorry to hear of this Zurf.  My heart goes out to everyone.

Hang in there man.  I know your faith is strong; I pray it brings you comfort.

I used to be disgusted; now I try to be amused.
Elvis Costello

Sorry to hear of your friends passing. I am going to the funeral of my next door neighbour on Thursday morning. Also because of the cigarettes. He was only 52. Damn shame.

Were all so sorry to hear of your friend just know were all thinking of you at this time, losing a friend is never easy.

My most heartfelt condolences to you and your friend's family. You all are in my prayers.

Very sorry for your loss Zurf, I'm sure he is with God and, God is with You at this time.   b

Thanks all for your support.  I went out to dinner with a friend last night and we got to talk through a bunch of stuff, which helped a lot.   I also went and took some dinner by for his family and got to meet them (they live on the other side of the country).  After meeting his dad and his brothers, I understand how he got such a gentle and curious nature... by example.  What a terrific and kind family he had.

Sincere sympathy for your loss Zurf.

I also lost a dear friend 3 weeks ago. He " Ken" never smoked or ever touched alcohol. Never said a bad word about anyone in his young life.
I have witnessed a lot of deaths { friends and family } over the last 5 years. I cannot explain why Ken's death has left such sadness
in my heart, with the  question " WHY Ken Lord ".

Why Blend in with the Crowd ? When you were made to stand out !

Mike's family held a memorial service for him last night.  His shell has been cremated with portions to be sprinkled in the Pacific Ocean and the Chesapeake Bay for burial at sea.  Mike had two passions - faith and fishing.

At the memorial service, the pastor opened up the opportunity to those in attendance to speak.  Many stories were told, each capturing an aspect of Mike's personality, from his intense concentration, to his sense of humor, to his curiosity, to his generosity.  But each story had some quirk or twist that made it uniquely Mike and in so doing funny.  No one laughed more or smiled more or had more fun than Mike. Never have I left a service of that sort having laughed so much.  There were a number of people there whom I knew from other circles.  Mike touched many lives.

In the receiving line, I told his father one more story about canoeing with Mike.  And then I told him that canoe of Mike's is still on the boat rack at my house.   His father said, "It's yours!"  So this morning, I am thinking about how I can use it in a way that would please Mike.  I think I will seek out at least one child per year who is interested in fishing and get him or her out in it and leave them at the end of the day with his or her own rod/reel and tackle box.  I've taught many children (and adults for that matter - including Mike) to paddle, but I haven't taught many to fish.  I think Mike would approve.

Great idea Zurf!  From what little I have read here, it sounds as if he was the type of guy who would think this is a great idea as well.  Down the road you could think about actually creating a charity or foundation in memory of him to accept donations to support this type of action and keep his memory alive for future folks to appreciate as you have.  Sorry for the loss, but you gained some great insights into what you already knew to be a fine friend.